Victor Addis' life changed the day he started working with Marlys Staley and the Circle Tail dogs at the Ross Correctional Institution in Chillecothe, Ohio. Now, he is using what he learned from Circle Tail to change the lives of at-risk youths.

Victor's first Circle Tail dog was Lena, a pregnant beagle who no one else in the dog program wanted. Lena gave birth to 12 pups in Victor's cell and, as Lena had mastitis and couldn't produce milk herself, Victor spent a hot summer bottle-feeding all of her pups, often missing dinner so he could tend to the puppies. Victor says he wouldn't change the experience for anything, as it was the beginning of his new life.

He later moved to the London Correctional Institute, a lower security facility, and had the good fortune to be there just as Marlys was getting the London dog program started. He signed up to learn how to work with the service dogs in training, and went on to train so many service dogs that they became his specialty. Victor says he read all the dog training books he could get his hands on, and learned as much as he could from Marlys, taking notes whenever she would give training sessions at the prison. He still considers Marlys his mentor, and consults with her regularly.

When Victor was released from prison in 2003, he knew he wanted to continue working with dogs. Eventually, he formed Dogs Training Youth, an organization to help at-risk youth by exposing them to the joy and unconditional love of a dog.

The program started modestly, with Victor meeting with a handful of kids from his neighborhood who had taken an interest in his own dog, a beautiful Rottweiler named Cassie. Victor, Cassie, and the kids met weekly at Dorl Field in Norwood, Ohio, and Victor taught the kids how to work with Cassie using a clicker and other methods of positive reinforcement. Eventually, the kids started asking Victor if he could show them how to train their own dogs, and Dogs Training Youth was born.

The program, which only operates in the spring and summer due to weather and the lack of an indoor facility, pairs at-risk kids with local rescue dogs, and helps to teach the kids responsibility and respect for other living creatures through their work with the dogs. As Victor states, he sees things "start to click" for the kids as they work with the dogs, and they become excited and confident as they see what they and the dogs can accomplish together. As the kids gain more confidence and self-respect, they are less inclined to turn to the street looking for a sense of belonging.

Dogs Training Youth is getting ready to start its fourth season, and Victor is expecting as many as 13 kids to participate this year. Each one will have the opportunity to change their lives with the help of a dog, just as Victor changed his own life through the dogs of Circle Tail. 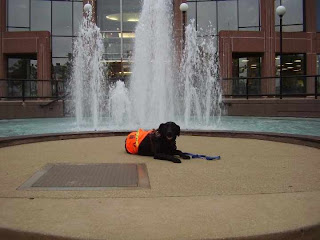